Mickey says: “It’s February and if you are in the second month of your calendar, it’s time to Pick a Goal and Create a Plan to achieve it.” 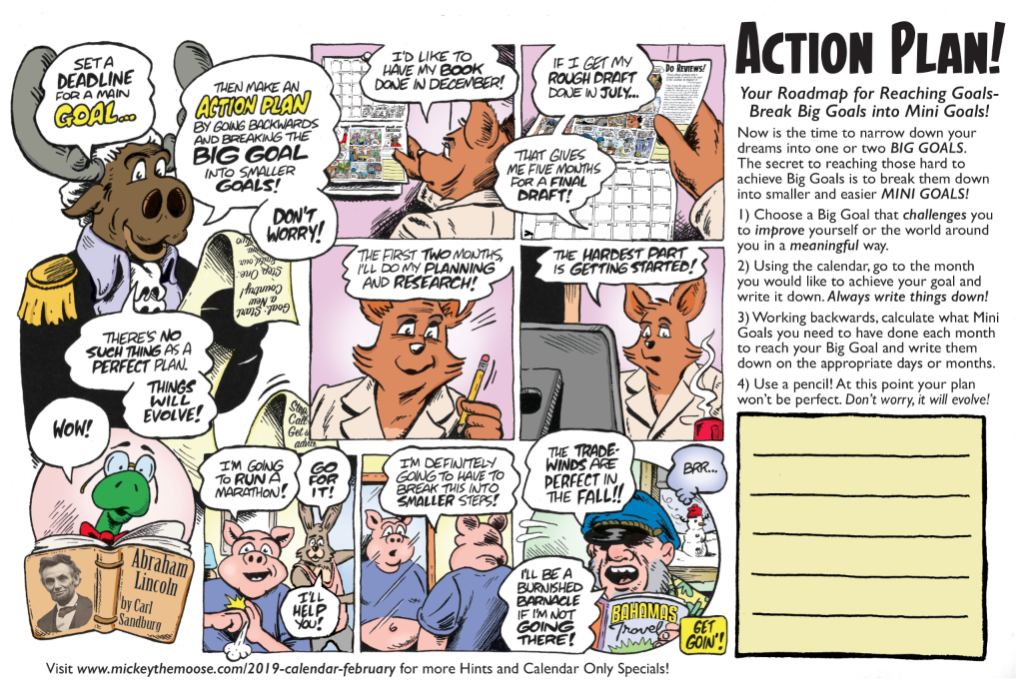 If you are like most people, you might be having some trouble selecting just one of the goals you thought you might be interested in from last month. There is no reason why you can’t have a few smaller goals to go along with your big goal, but don’t let yourself get overwhelmed.

Part of the Goal Setting process is to be able to focus and visualize your goals. Too many things going on will crowd each other out and nothing will get done. For the purpose of this year’s calendar, let’s pick just one or two goals and make them a reality before we start on others.

After you’ve decided on a single goal, it’s time to start breaking it down into achievable and schedulable mini-goals. The idea behind this is to turn Giant Tasks into an ongoing series of Smaller Tasks. Shake & Bake have it figured out:

The best way to do this is to set a deadline for your ultimate goal. Here are a few examples:

Whatever your goal, large or small, first set a Final Deadline. Be sure to write it down on a specific day in your calendar (remember, always write things down).

Next, you need to figure out what important Milestones in the process would be. In other words, what small steps do you need to reach the Big Goal? For example, if you are pursuing the trip to Europe, important milestones might be:

GOAL: Travel to Europe in September

You may have several more steps, but you get the idea. You are breaking down the Giant Goal into smaller, simpler ones. Next, you want to schedule those mini-goals on the calendar:

GOAL: Travel to Europe in September

Once you’ve set those smaller deadlines, lock them into your head! You need to ABSOLUTELY BELIEVE you can reach EACH goal. Visualize not only the Final Goal but each individual part of the goal. Your mind wants to make the things you are visualizing real. Help it along!

I’ve found it’s helpful to sometimes break these mini-goals even further. Let’s take a look at #3, Save Up Money. You might break it down this way:

And so on, until you reach your objective. 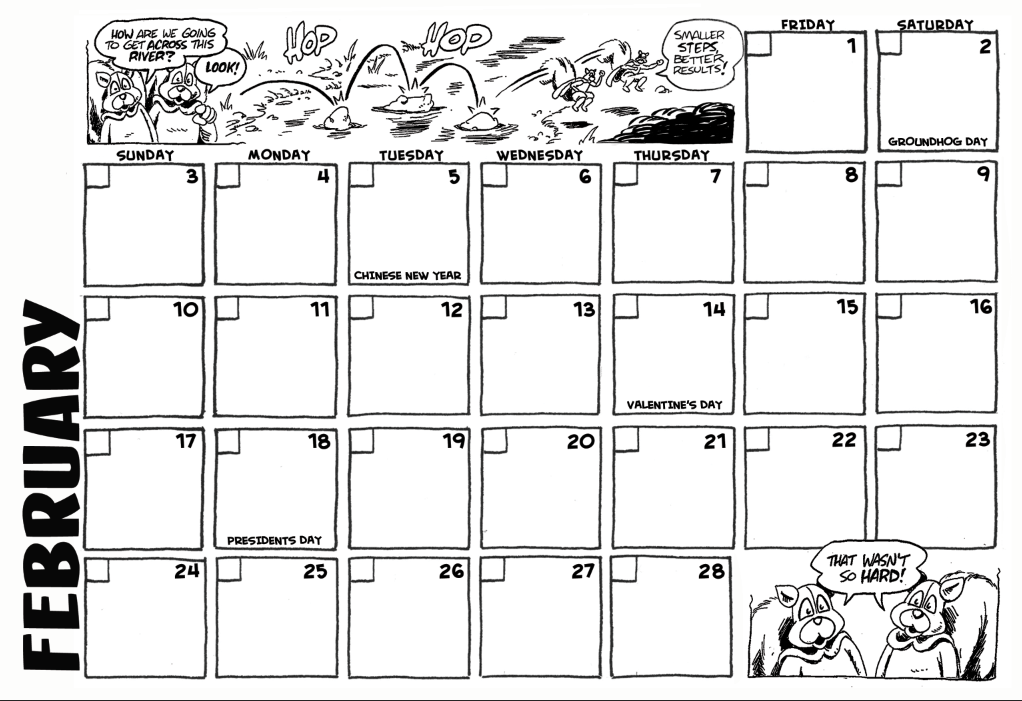 We have a few printed Calendars left in Mickey’s Web Store!
Get them while you can, or download our FREE PDF VERSION!

From the goals I outlined last month, I have decided to pursue the opportunity to make a film. Filmmaking is a complicated process that often takes much longer than a year, but I am going to design a project that I can premiere on December 1st.

I have a little advantage in that I have a great deal of experience and training in film and video production, so I’m not exactly starting from square one, but it’s still a huge goal.

Here’s how I’m going to break it down.

Each of these steps is broken down into smaller steps and there are a few other things in there that I haven’t included here, but that’s the basic plan. It’s an incredibly ambitious plan and a huge undertaking, but I believe, following the Goal Setting Plan outlined in the Goal Setting Calendar, I can do it.

Helpful Hint: I will use my calendar exclusively for this particular goal. Whenever I have ideas or make notes, I tape them into the calendar on the relevant month so I can include them in the ongoing plans. If I get an idea about, for example, budgeting, I’ll tape that note into March so I’m not losing focus on the things I need to get done in February.

Here’s a page from my calendar:

Join us back here next month as we take a look at Facing Obstacles!

We want to hear about your progress!

Write to us at moosecomics@gmail.com and let us know how you are doing!